Posted on January 19, 2011 by MJJJusticeProject

It’s TIME… to stand up and make YOUR voice heard.  Strike while the iron is hot

Now is the time to make your voice heard. CBS, USAToday and Huffington Post, all mainstream media outlets used the discriminatory and racist term “jacko” in reference to Michael this past week.  After the MJGlobal family commented en masse and made clear, civil and reasonable request for its removal, we were not disappointed.  All three of them edited their copy and changed the “jacko” to “Jackson.”  Of course, it should never have happened but the fact that they changed it under great admonition from his World Wide fanbase is an amazing turn of events.  They have shown that they are listening to our concerns and this is heartening.  We have seen many such steps in the right direction along this road of securing vindication and justice in the media for our beloved brother, Michael.  Each tiny step of success bring us closer and closer to having his true legacy and his truth completely and honestly represented by the media.

Please take time to read this OPEN LETTER TO THE MEDIA  Support it by making comment, circulate it on every online medium you have available to you.

The TIME is now.

With the Rupert Murdoch phone hacking scandal being exposed and sick tabloid, News Of the World biting the dust, is it possible that shift in the paradigm of journalism is forthcoming? One can only hope and we can do our part to make some noise demanding that a modicrum of integrity be brought BACK into journalism.  The US counterparts of the UK media debacle are shaking in their perspective boots hoping against hope that they won’t be also implicated in the immoral and unethical practices that occurred under Murdoch’s watch. 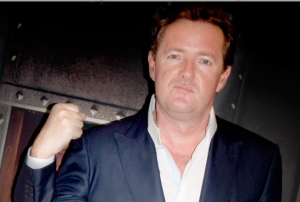 CNN’s Piers Morgan is performing as the Artful Dodger these days .. declaring loudly that he is being smeared by ‘tabloid’ type bellyachers.  Wouldn’t this be a prime example of the “pot calling the kettle black” ?

Morgan’s first major position in national media was as de facto editor of The Sun’s show business column, ‘Bizarre’, under the editorship of Kelvin MacKenzie. We all know how hateful MacKenzie has been toward Michael Jackson and his children so we can only imagine what dirty, dishonest, dishonourable, disreputable, illegal, immoral, and  improper tutelage was afforded Morgan under his editorship. Morgan then worked within Murdoch’s empire as Editor of News Of The World from 1994-95… during which time Michael Jackson was their whipping boy.  This is the tabloid that penned the insidious “wacko-jacko”, that Michael Jackson detested so much. Every article written had a headline that was snarky, mean-spirited and filled with salacious stories that had no bearing in fact.  Morgan moved on over the The Daily Mirror as Editor to continue his reign of terror. From 1995-2004 he was Editor and continued on along the same vein of maliciousness, calloused and demented reporting that was such a bane to Michael Jackson and other celebrities, until he was sacked.

It has been recently reported that he freely admitted to listening to a hacked telephone recording of Heather Mills speaking with Paul McCartney that highlighted their relationship troubles and while the reporter apparently didn’t run the story, it is clear that Mill’s phone was indeed hacked and Morgan knew about it.

His smug response? “I have never hacked a phone, told anyone to hack a phone, nor to my knowledge published any story obtained from the hacking of a phone.” The caveat?  “to my knowledge”  hmhm..  ..this was the same song the Murdochs were singing at their meeting with the Parliament regarding the same issue.  Seems like none of the top dogs who supposedly run the show, were actually running the show?   If their underlings are running willy nilly, without any supervision, then why on earth were these giants of the media earning the big bucks?

Happily, these questions on how Morgan came to hear the message has led one British lawmaker, John Whittingdale, chairman of a parliamentary committee to suggest if not demand that Morgan “absolutely should” come to Britain to answer questions.

He “absolutely should” be made accountable and so should Murdoch. The top dogs that have made their careers lying, scheming, spying and purposely running stories of half-truths, innuendos and down-right lies need to pay for their crimes against humanity.  Yes.. these are crimes.  Journalists are supposed to report for the greater good of society, not create stories to increase their own notoriety and the bottom line of their employer.  Has the greater good been uppermost in anyone’s mind involved in the media for the past two decades?  We would answer with a resounding  …NO.  More heads should be rolling and we can help by being vocal on our Twitter, forums, blogs and Facebook accounts.

Get involved – Be part of the PROJECT.