and gave a short speech in Beverly Hills California -Evening of Love, Light and Laughter to Benefit Lupus LA and Lupus Research. Image provided by Getty Images.  Please visit the LupusLA website.  Check out their Event tab for detailed information regarding donations, walk-a-thons and other events planned for the future.   On September 22nd, 2011, a “Get Lucky for Lupus” fundraiser is scheduled, please donate generously.

Below is another picture of Michael Jackson with his physician- Dr. Alan Metzger, a Lupus Specialist Rheumatologist focusing on immunology, at the same LupusLA fundraiser. The fact that Dr. Alan Metzger specializes on Systemic lupus, and was  Michael Jackson long time physician his whole life and that both attended fund-raising events for lupus patients supports the idea that Michael’s lupus eventually developed into this form of lupus which often happens to the discoid lupus sufferers. 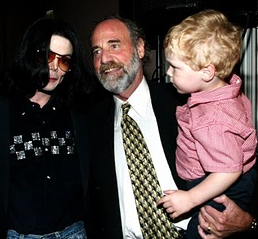 This month we are highlighted the Lupus LA charity because this skin disease, severely impacted Michael’s health. However, even though he suffered with this debilitating and often times painful disease he never allowed it to stop him from achieving his goals or realizing his dreams. Michael always lived in faith and he said, “Without hope, we are lost.” 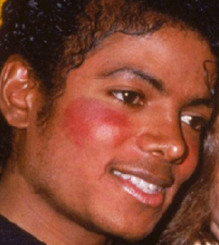 It has been confirmed that Michael Jackson was diagnosed with Lupus in the mid 80’s when he exhibited the Malar rash that and experienced pleurisy which are two of the early onset symptoms of the disease. Being a private man it was not his habit to discuss his medical history and it was this desire to keep his medical history private that allowed the media to fabricate malicious stories to fill that vacuum of information.

Dr. Deepak Chopra, in a People Magazine interview is quoted in People Magazine as saying “He had a lot of blotches on his skin, huge white patches all over his body. So he would cover up his body and that of course gave food for fodder to the press.”  After Michael’s death, Dr. Arnold Klein who treated him for this skin condition, spoke extensively to Larry King about both Vitiligo and Lupus –

IMPORTANT: Please be sure to watch and listen this very informative video of Dr. Robert Lahita. of the Newark Beth Israel Center speaking with Diane Sawyer. He explains that many of the behaviors of Michael Jackson, i.e. – the use of the umbrella, clothing and were part of a physician prescribed advisory to protect him from further trauma from the sun.

Additionally, he describes other symptoms of this very painful disease and it is important to note the Michael suffered in silence. Rather than publicize his health issues he did the best he could do to camouflage his spotted skin with make-up, gloves, etc..and control his chronic pain with medication prescribed by physicians. Lupus is a very painful disease as it attacks the joints by causing inflammation and this information was readily available to the press for many years, they just chose to turn a blind eye to Michael Jackson’s reality.  It did not suit their aim at mischaracterizing him as  a “freak” and a “wacko” so they simply buried the fact that he suffered with this condition.  Please click the links for two very informative websites that discuss Michael’s silent and brave health struggles: Vindicate MJ and MJJ777.  These websites are crucial reads and amazing posts regarding the press and how they constantly and erroneously planted the idea that Michael wanted to be white. It is important to understand this disease so please watch this video entitled “Invisible Suffering of Lupus Patients” in which the sufferers of Lupus describe this silent but painful condition.

Please donate generously to research and developement of a cure for Lupus.