Posted on September 21, 2012 by MJJJusticeProject 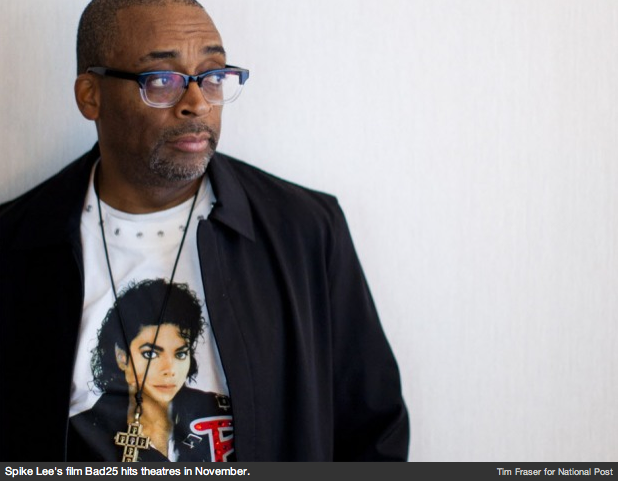 Spike Lee wears a Michael Jackson T-shirt that matches the Michael Jackson Air Jordans the 55-year-old director wears tucked out of his jeans. Lee, director of Do the Right Thing, Inside Man, Malcolm X and five documentaries, recently premiered Bad25, his film about the making of the Michael Jackson record that debuted in 1987. Bad, which will be re-released on Sept. 18, was Jackson’s follow-up to Thriller, still the best-selling album of all-time. Ben Kaplan sat down with Lee on the last day of TIFF and asked him what he misses most about his old friend.

Q Given your documentary history — the church bombing in Birmingham and the hurricane in New Orleans — why make a Michael Jackson film?

Q In 1987, when Bad was released, you were preparing School Daze. Were you as influenced by Jackson’s visuals as much as his music?

A I was just following what Michael did. He put a great emphasis on his short films and they set the standard and really made MTV, it was mutual. And many people told me that Michael, if he had lived longer, would’ve gone into directing films.

Q You directed Michael Jackson in the video for They Don’t Care About Us in 1996. What do you remember?

A It was one of the highlights of my filmmaking career.

Q Were you having flashbacks to yourself as a 12-year-old in front of the television?

A I wasn’t thinking about Ed Sullivan, I was thinking that I’ve got to do a job right, because I can’t let Michael down. I don’t want Michael being displeased.

Q Let’s talk about Bad, the album. At that time, were you a fan?

A Like everybody, I’d waited five years for the follow-up to Thriller. I remember, and I even put this in the film, that I didn’t understand the song Just Good Friends, the duet with Stevie Wonder. I don’t stand that song.

Q What do you mean?

A I don’t know why two great songwriters, Stevie Wonder and Michael Jackson, would sing someone else’s song that’s not even good. Stevie’s a good friend of mine, too. He knew I was going to ask him about that song.

A Quincy [Jones, the album’s producer] says in the voice over, “I know I made a mistake.” It’s acknowledged.

Q Quincy also says he didn’t like Smooth Criminal. That’s my favourite song on the disc.

A They made 66 songs for Bad; you have to whittle them down.

Q With the record being re-released and you making this film, are you attempting to bring the focus back with Michael Jackson to the music?

A This is a re-examination. The way Michael was treated – Wacko Jacko – it’s criminal the stuff they wrote about him, so I do think a lot of people are going to go back and listen to this album. People were caught up in Thriller and Bad was a follow-up to Thriller and overshadowed, but it stands up on its own legs.

Q You mention the Wacko Jack stuff. Did that taint your impression of the man?

Q You ask everyone in the film where they were on June 25, 2009, when Michael passed. Where were you?

A I was in Cannes for an internet convention and at dinner in Monaco and I got the word. It messed me up for months.

Q Would you call this a personal film?

A All my films are personal. Especially my documentaries.

Q You’ve now spent two lives with Bad, as a music fan and as a documentarian. What’s your favourite song on the disc?

A Man in the Mirror. That’s the anthem and Michael sang the hell out of it.

Bad25, the record, is out Sept. 18 on Sony Records. The documentary by Spike Lee will premiere in November.