We Are The World performed in Rome for Pope Francis

Posted on October 29, 2013 by MJJJusticeProject

Today we were sent a tweet by @Hopeygrace that sent our spirit soaring up like a balloon up into the universe like the ones in St. Peter’s Square.  Michael Jackson, our beloved brother to the entire world, was honored in this celebration of Family- Incontro Del Papa con le Famiglie in the performance of We Are The World.

Vatican City, 26 October 2013 (VIS) – More than 150,000 people from 75 countries representing all five continents gathered in Rome this afternoon to meet the Pope in St. Peter’s Square, following the pilgrimage to the tomb of St. Peter as part of the Year of Faith. The pilgrimage was entitled “Family, live the joy of faith”, and the Holy Father, who toured St. Peter’s Square by open car, embracing children along the way, dedicated his address to this theme. Read full accounting of days celebration.

Michael and Lionel Richie constructed the song to be anthem.  On the  20th Anniversary of We Are The World, Harry Belafonte acknowledged:

“First and foremost was that we truly have the capacity to make a difference, and what “We Are the World” did was to define the best of who and what we are.

Perhaps the ultimate compliment is that the song has stood the test of time — anyone old enough can still at least hum along.”

We can imagine that Michael would greatly appreciate that a children’s choir performed this song before such a large international audience and the Pope- as Michael mission in life was to bring hope, love and assistance to the world’s children. 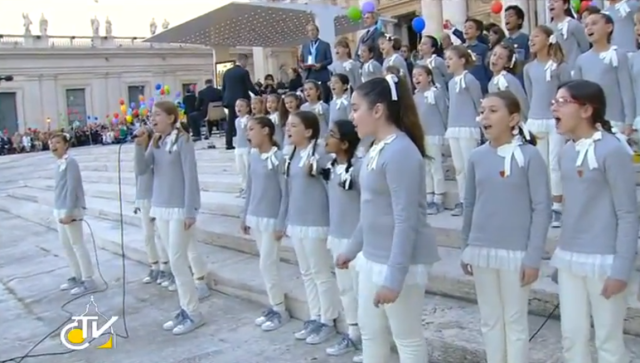 To view full Celebration of Family speeches and songs

A balloon release at the end of the song, in the celebration of Family,  fills the heart with a joyful expectation and a continued striving for universal brotherhood which Michael Jackson promoted throughout his lifetime. 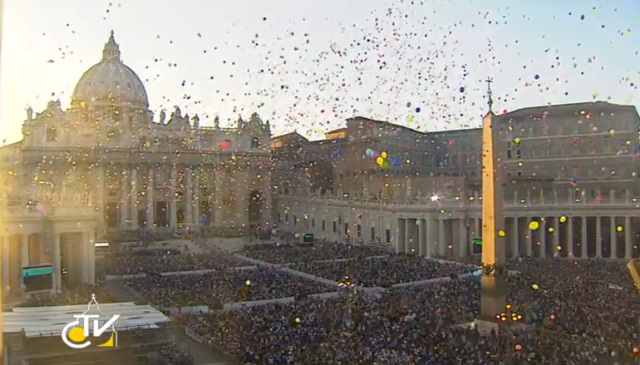 Michael Jackson believed in God and often spoke of how his talent was merely a gift dropped in his lap from the Heavens. He constantly glorified the Universal Power and often said he shouldn’t take credit for he was only an instrument by which the words flowed.

We appreciate the song’s performance at St.Peter’s Square for it perpetuates Michael’s truest essence of love, empathy and compassion for the world’s neediest among us- the children. 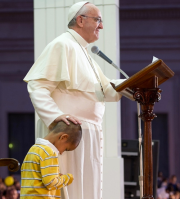 A little boy stole the Pope’s thunder by joining him on stage during his speech and sitting in the Holy Father’s white chair. Seemingly unperturbed the Pope understood the image of this child was indeed fitting for the occasion of honoring Family.