Posted on November 1, 2014 by MJJJusticeProject

Since the MJGlobal family is so vast and connections across the world are instantaneous through social media sites, such as Facebook and Twitter, we have become the largest advocacy group on the internet.

A plethora of Michael Jackson topics come across our news feeds daily and none thrill our hearts more than stories that relate to how Michael Jackson and his art has changed or affected the life of a child. It is widely known that Michael felt it was his mission on this earth to help sick and needy children across the globe. Besides the famous “We are the World” phenomenon that “fed half the planet” according to Dr. Wayne Dyer, Michael spent a lifetime attempting to make a change. He advocated for vital  immunizations, contributed millions to charitable endeavors, visited countless pediatric cancer wards, orphanages, & clinics, funded life saving surgeries and oversaw 2Mil of aid delivered to wartorn Sarajevo.

What touched the children more than the toys, the medical help or the food was Michael’s heart, compassion and knowledge that the cure for what really ailed them was a lack of feeling loved. Children felt this loving glow from Michael as soon as he entered a room.

Amalia Amaki, an artist described why children were drawn to Michael Jackson:

He had an “understanding that nothing had the power to touch another human being like love. He knew that and however he did that…  think about it…. whenever he walked into a room there were babies in Aukland, New Zealand or the children in Poland, children in countries where you can’t even speak the language but the behavior is such that they get it.”

“They gravitate to him. They don’t know he’s a superstar, they just know he loves them and that thing draws them to him, and that communication happens on a level that is above a normal understanding, so much so that there are occasions when he has to leave and the children start crying. It’s not just an ability to love, it’s a willingness to love and it’s a willingness to do it in whatever form is necessary to convey YOU ARE LOVED!”

This is why Michael Jackson is respected, admired, honored all over the world. After five years, people wonder when Michael Jackson fans will “get over” his passing. Truth is, we never will because he has transcended this earthly plane and now is legend. The vibration and positive energy he released upon our world is still resonating and will continue to do so for generations.

These essays were written by fourth graders from Somerton, Arizona. in Yuma County, Arizona. A teacher at the elementary school was kind enough to share them on her facebook with this comment.

“Around the corner from my fifth grade classroom is a fourth grade classroom. Their teacher just put up a bulletin board of biographies the students had written about celebrities. Michael is featured on this board five times! These are three of the best. Michael is indeed eternal. I’m not sure what sources the students used to get their information, but all the biographies were factually correct, and very respectfully written.” 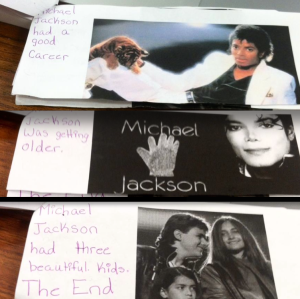 This gift is indicative of the spontaneous open, giving nature of children that drew Michael to children and where he stated he saw God and found great creativity. The best part is that the child did this for someone else because she knows, Michael holds a special place in the teacher’s heart. This kind little girl gave a very special gift of herself while gifting this litte tribute to Michael, to someone she obviously admires. What better way to pass on the message of LOVE that dominated Michael’s life?

MJJJusticeProject and many other Michael Jackson advocacy groups know that academic study of Michael Jackson will be the only way for the new generation to get a truthful accounting of his life. Most of the old rock critics have pigeoned holed Michael Jackson as the “Thriller hit maker” as if he accomplished nothing beyond that, but HIStory proves otherwise.  Recent analysis of Michael Jackson’s Dangerous, by Susan Fast has recieved tremendous reviews  and accolades for her “utterly compelling, utterly intelligent reassessment of Jackson’s oft-maligned record of 1991 and a challenge to anyone who thinks that they have a grasp on Jackson’s controversial art.” (Stereoboard) This is the new wave, a shift that we’ve been waiting decades to witness.  For years, very few books have been available and most authors like Armond White, author of “Keep It Moving ;The Michael Jackson Chronicles” were required to self-publish due to the flagrant anti-MJ stance of book publishers.  Armond White graciously sat down with Lauren Trainor a Jam Cafe for a discussion about his pioneering the path regarding books exploring Michael Jackson’s art, influence and legacy. He speaks pointedly about racism being a factor in attempts to create a Michael Jackson’s caricature rather than explore his reality. Now, fortunately, attitudes  have changed in publishing and we can examine his work with the analysis of many music scholars and aficiandos. The exploration of  Michael’s mind while he nourished a concept and painstakingly, with this usual perfectionist’s eye created and completed -“Earth Song: Inside Michael Jackson’s Magnum Opus. One MJ advocate calls this Joe Vogel work ” a masterpiece about a masterpiece”.

We can no longer allow biased media to invent a caricature of this man and pass it off as fact. “Otherness and Power: Michel Jackson and his Media Critics  by Susan Woodward- is  a “book examines the origins and psychological underpinnings of the media’s hostility by closely analyzing some of the most harshly critical writings about Jackson.” (Amazon) It wil be from research and exposing the truth that the realtiy of his life, and those who worried about his world-wide influence, will soon be commonly known and it will be the next generation of Michael Jackson fans who will demand this research continue.

This younger generation, as the ones who’ve written those beautifully fact based essays above, that is not blinded by tabloid excessive use of salacious innuendo that will be in the forefront and the bearers of Michael Jackson’s truth. His business acumen which up to now has never been considered at all, has been detailed in a book by Forbes Senior Editior, Zack O’Malley Greenburg, “Michael Jackson Inc.,The Rise. Fall and Rebirth of a Billion Dollar Empire.”  In it,  Greenburg proves that Michael Jackson pioneered and intelligently capitalized on music publishing rights, image/brand ownership concepts and left a blueprint for financial success, for the likes of JayZ and 50Cent.

We are invigorated and inspired by the amount of in-depth books and articles now being written regarding his insightful approach to addressing social ills within his art, his excessive yet under-reported philanthropy and his mission and message of a global brotherhood and unity of mankind.  Please visit the website of Joe Vogel, author of  “Man in the Music: The Creative Life and Work of Michael Jackson,  for a complete listing of authors and academic research provided, entitled  – The Michael Jackson Studies