Posted on August 28, 2018 by MJJJusticeProject 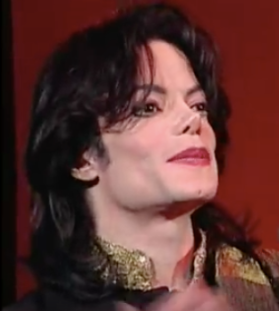 Bollywood is replete with actors, dancers and singers who credit him as their inspiration and his influence to seek their own artistic dreams. In 1999 he was presented with a Humanitarain Award at a Gala event in New York, from the members of Bollywood community, where he gave a emotional speech about the difficulties of handling fame and what a man must do after achieving it to completely be considered successful.

excerpt : “Thank you very much. Thank you very much for this honor you have awarded to me tonight. I have always believed that the real measure of celebrity success was not just how famous he becomes but what he does with that fame and fortune, especially in today’s technological and media advanced society. The attention and fortune showered on an individual celebrity is often times immensely disproportionate to his or her achievements. Today a person can literally become a celebrity overnight throughout the entire world and that kind of attention can become difficult for an individual to handle. I have also learned that such fame can also be an effective medium to focus attention and mobilize resources for a worthy cause.

I have been blessed with so much and have the opportunity to do what few others can but I believe it is more than just an opportunity but a duty. I feel to reap and enjoy the fruits of my talents for myself would be selfish, irresponsible and unconscionable. In these days of such abundance and advancement in what we can do, it pains me to think that we do so little for our children. In some ways I feel underserving to receive an award for something that is my duty.”

The MJGlobal family is the largest social media group on earth and we are connected through our respect for Michael Jackson on Facebook, Twitter, Instagram, Pinterest and other social network platforms. Watching the out-pouring of respect and love for Michael Jackson during August on these sites only solidifies our belief that the majority of the world sees Michael Jackson for the man he truly was and not the false narrative that the tabloids and the lazy copy/paste media fabricated.

Last week we were sent a tweet by a Michael Jackson fan, MoonwalkerDeboleena on Twitter with screenshots of a newspaper article.  We were alerted that a tribute had been written to honor Michael Jackson during the world-wide observance on his Diamond Birthday and it had been published in a local newspaper in India. Within short order, we contacted the author of the piece to gain permission to republish the piece on our wordpress. She not only very graciously agreed but also proactively obtained permission from The Assam Tribune as well. We feel so blessed to be able to share it with our readers this 60th Birthday Tribute to Michael Jackson.

It’s hard to write something of your own about someone who has probably been the most written about person in the world for the longest period of time. After all, there was a point when his signature hat or glove was enough to send the whole world into a sudden frenzy of sorts. And yet, I am going to give it a try, because like almost everyone else of my age and even before and after, I have grown up knowing Michael Joseph Jackson as the most famous and the biggest star in the world.

In today’s day and age, it doesn’t take a lot for songs or acts to go viral. The sheer weirdness of it all can make it the most popular thing on social media before you even know it. When Michael Jackson’s album ‘Thriller’ released in 1982, there was no internet or ‘going viral’ or online promotions, and yet it captured the passion of an era like no other. It broke barriers, it defied norms and it ruled like never before. ‘Billie Jean’ from Thriller was the first song by a black artiste to be played on MTV (not because they weren’t talented, but for obvious racist reasons) and it thus opened the gates for all the subsequent black artistes that came after Michael.

In her book, My Family: The Jacksons, Michael Jackson’s mother Katherine Jackson mentions how even after giving a hugely  successful album (both in terms of critical appreciation and mass appeal) as ‘Off The Wall’ in 1979, Michael Jackson didn’t get the acknowledgment that he deserved.  He was blatantly reminded by a number of magazine editors that no matter how successful they are, black artists on covers do not sell magazines. It was at that very point that a young and determined Michael had decided that the next album of his would be so big that no one on the face of this earth would be able to ignore it. And boy was it big! Thriller became the biggest selling album of all time, a record that has remained unbroken after 36 years. It started the trend of creative music videos, with the title music video, ‘Thriller’ becoming the most significant music video of all time and till today, it is the only music video to be included in the United States National Film Reservation Board’s National Film Registry of “culturally, historically, or aesthetically significant films”.

Long before Thriller, Michael was followed, emulated, mobbed at a tender age, when other children would be doing the most inconsequential things and enjoying the small little joys of childhood, something which he missed terribly and which had a deep impact in his life throughout. In his autobiography, Moonwalk, published in 1988, Michael mentioned how very early in his life, he had learnt to cover his eyes first with his hand while in a mob, to not get hit there by the hysterical fans.

Post Thriller and his most iconic performance of ‘Billie Jean’ at Motown 25 where he introduced the legendary ‘moonwalk’, Michael Jackson became the brightest star on this earth and no one came even close. Critics and fans have often wondered what was it about him that made him so irresistible like no other. I suppose, like he said often, when he danced or sang, he didn’t think. He became one with the music and the rhythm. He was the dance and the song in that moment, something which not many artistes can do. And everyone just wanted a piece of him, his music, his energy, his hat, his glove, his everything. By the end of the 80s, Michael Jackson became the ‘King of Pop’, an epithet which stayed with him all his life and even after his death.

Though I cannot really ascertain the impact or the influence that he has had on every country, I clearly remember that, in India, even during those no internet times, he was the only International star whose name everybody knew. If he had influenced popstars like Justin Timberlake, Usher, Chris Brown in the west, he had done that for stars like Prabhu Deva, Hrithik Roshan, Shahid Kapoor, Remo D’Souza and many more in our country. Even today, you cannot have a reality dance show, without a bunch of people impersonating Michael Jackson.

While his singing, dancing, song-writing abilities together with his inimitable charisma made him the ‘God-like’ phenomenon that he was, it was his humanitarian side which earned him the greatest respect from his fans. Along with giving him the award for the Most Successful Entertainer of all time and various other such awards, The Guinness Book of World Records also recognized him as the star who supported 39 charities, more than any other celebrity. For someone who faced a great deal of harassment and accusation from the media, from the people around him throughout his life, Michael kept on spreading the message of love and healing till his very end on June 25, 2009.

It’s going to be his 60th birth anniversary on 29th of August this year and ‘Moonwalkers’, as the fans like to call themselves, continue to celebrate his art, his legacy and the once-in-a-lifetime joy and experience that Michael Jackson was and will always be! The King of Pop, the Thriller, the Peter Pan lives on!

Published Aug 24th 2018 Horizon of the The Assam Tribune

“I am a freelance writer and I have written for various websites as well as The Assam Tribune. I am also a teacher and I am from Assam, India.”