Posted on February 15, 2012 by MJJJusticeProject 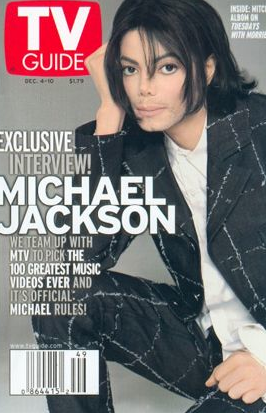 Here’s the full TV Guide interview that has revealing sections about his children, Lisa Marie, relationship with Joe.  Michael’s answers are in blue
It’s long, but worth a read…

“The Once and Future King”
TV Guide Interview – December 1999

The legend is almost too large to comprehend but never fails to fascinate. How to make sense of Michael Jackson, a man whose immeasurable talent is often overshadowed by tabloid headlines? The former Jackson 5 lead vocalist rocketed to solo fame with his 1982 album, Thriller (the video of the same name has been declared the greatest ever by TV Guide and MTV). Then, in 1993, claims of child molestation brought against him by a 13-year-old boy – charges that were settled out of court for an undisclosed sum which the singer has vehemently denied – heavily tarnished his platinum image. Still, Jackson presses on. Seated in a New York City hotel suite,. The notoriously shy pop star is charismatic and bubbly – a regular guy, even – as he discusses future projects, including an as-yet-untitled CD he describes as “happy, dance music, relationship stuff”, and a reunion album with his brothers. And then there is “The Nightmare of Edgar Allen Poe”, in which he will star as the 19th-century writer. Scheduled to shoot next year, Jackson says he’s doing the film because Poe’s “life is very interesting”, adding, without irony, “I love an artist who doesn’t play it safe.”

This entry was posted in In His Words, Uncategorized and tagged Michael Jackson interview, TVGuide. Bookmark the permalink.